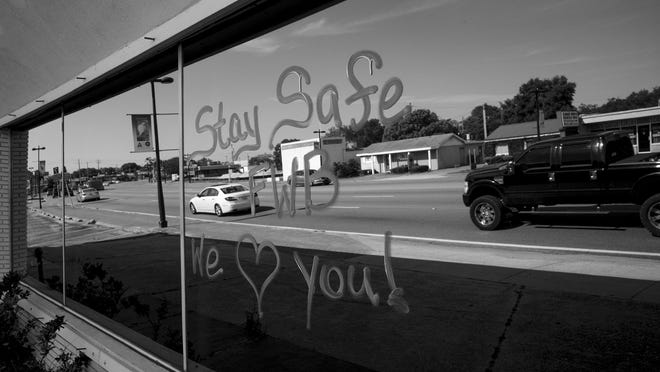 FORT WALTON BEACH — For Cole Huffer, 2020 has been the most enlightened year ever.

But, the owner of The Sound Café + Enlightened Studios in downtown Fort Walton Beach, means it. For him, like many others, it was a year overcoming life’s many challenges — and, sheesh, were there a lot of ’em.

“If you think about a forest, they do controlled burns where they’re just burning up the lower bottom so everything can come in and grow up much stronger,” Huffer said. “I feel like that’s what 2020 is, a controlled burn — necessary things that no one wanted to deal with but helped businesses like mine to adapt, realign and, ‘How can we do things better?’ ”

Huffer never truly came face to face with the prospect of closing his business, but it was within the realm of possibility.

The doors were locked for four months after the coronavirus outbreak, and even if they were unlocked, people were too scared to open them. The vacant roads on spring break between Huffer’s business and his former home in Santa Rosa Beach rivaled that of a ghost town.

The fear was palpable.

Huffer hasn’t had a non-stressful day since.

“To even still be open is a huge thing,” he said.

What helped Huffer’s business stay afloat was a gumbo of lenient landlords, Paycheck Protection Program (PPP) money, grants and — he might not say it — resilience. One grant he is applying for might put them back on track, he said.

“2018 was really great for us,” Huffer said. “2019 was almost three times as much as 2018. It was such a nice growth. 2020 would’ve been really awesome if there was no pandemic. It feels like we’ve backtracked and we’re having to start all over again. I know a lot of people had to close, people who have been open longer than I have.”

Huffer made changes: scaling back from 10 employees to three and opening at 5 p.m. instead of in the morning. But that's being enlightened.

Despite other losses, Huffer did see an uptick in video production clients. Businesses evolved in the most socially distanced ways.

“What I thought we would see more of is outdoor events,” Huffer said. “Then (Hurricane) Sally came through and messed up everything. It’s been a really strange year. I stopped trying to understand the ‘why.’ ”

Heck, Huffer's interview with the Daily News was rescheduled three times. It didn't faze him.

‘Not everyone’s cup of tea’

Few people know Huffer hustled for a decade in the jewelry business.

He was a goldsmith and certified diamontologist. His last gig in the industry was at the million-dollar Kay Jewelers store in Pier Park in Panama City Beach. Then he tried working at a bank, which was even worse, he said.

He said his parents never fully supported making the arts the center of his career. Frankly, his parents weren't convinced he would leave Nashville, Tennessee, where he was born and raised. His father, Larry Huffer Sr., died eight years ago, and his mother, Yumiko King, still hasn’t seen the current digs.

“The business was out of my house as a home studio for three-and-a-half years,” Huffer said. “Then I was like, ‘I can only take it so far out of the house.’ ”

“I can’t find anything like what we’re doing,” Huffer said. “What’s cool is it’s become this artist co-op. From the canvas to the jewelry to taxidermy to crochet to swords — 50 local artists in the area have a place where they can highlight their stuff.”

Through that, Huffer gets to pursue every passion in his arsenal. He even sells jewelry again now at the counter, and for a much more reasonable price.

“We’re not everybody’s cup of tea,” Huffer said. “I’m not really one who goes out to bars or clubs or nightlife. What I’ve done is create a place for people who don’t like to go out to those places and have a cool, comfortable place to just chill and hang out and have a good conversation.”

Huffer prides himself on creating a place where women are safe, too.

“When I designed this space with the wood and the lighting, I wanted to create a safe, well-lit, run-by-gentleman establishment for females,” Huffer said. “There’s a lot of dark places here for ladies. If you’re a female and come here on a Friday night and not get hit on all night.”

Huffer has a lot of ideas for downtown Fort Walton Beach. He would probably tell you if he wasn't such an introvert.

He likes the ideas he has heard from city officials about rerouting downtown and making it more pedestrian friendly, redoing the bridge and adding a multi-level parking garage. Huffer said he thinks more parking and cheaper rents are the main factors in the success of downtown.

“It would be something as simple as taking this parking lot between Run With It and (The) Boardroom (Pub and Grub) and making it a five-level parking garage," Huffer said. "Everybody knows what needs to be done, but how long is it really going to take for it to happen? How many businesses will come and go before it happens?”

And Huffer wants to see downtown thrive, like seriously thrive; so much so, he purchased a radio ad for it. The ad wasn’t for his business, but for downtown Fort Walton Beach as a whole.

“I don’t go out and try to chase change or chase people to do things I think may be right. What I want to do is something like that,” Huffer said. “In my ideal world, I would’ve put out a radio ad and I would’ve had X amount of business owners say, ‘Hey that was really great. Thanks for doing that. Can we pitch in $100 a month to keep that going?’ ”

Huffer’s skill sets would make it easy, too.

“I can record and produce radio ads; I can do video marketing," Huffer said. "There’s a lot I could offer to not only downtown as a whole, but also each individual business. If there was this downtown club of all the owners of the businesses and savings pot that went toward marketing, I would produce the work for free essentially and use that to put it on the radio or TV or smartphone. Am I proactive enough to go talk to every business owner? Not so much.”

Huffer has teamed up a couple of times with Run With It, as a space for race presentations. He actually suspects they used to occupy half of his location.

“One time when I was cleaning out the attic, I found a bunch of fake feet,” Huffer said. “I was like, ‘Something strange is afoot.’ ”

Huffer sees the potential in downtown.

But it sometimes seems like the place where businesses go to die. Shangri-La Vintage Boutique, Green Door Music, The GOAT — to name a few. Huffer said he thinks money plays a large role.

“I’ve gotten really minimalistic over the years,” Huffer said. “You don’t have to have a lot to have a good life. But there’s people here who love the money. They’re well off enough; they can let vintage clothes sit and get more vintage.”

Huffer had a rooftop concert two years ago. The former local band I’magene even set up their equipment wearing white painter suits under the guise of a construction site.

“If I owned the building, I would still be doing rooftop concerts,” Huffer said. “But I’ve been strictly forbidden. I received three cease and desists. For me, the business was out of my house for three and a half years prior to that, so I had to do something wild to let people know this is where I’m at now.”

In case you don’t know where he is at now, it’s Fort Walton Beach. He moved here in September, and as a resident can now run for City Council.

“I’m feeling like a free thinker like me that’s very down to earth, very reasonable, very minimalistic, but also a business owner in downtown Fort Walton Beach, might be able to steer people in the right direction if I took that route,” Huffer said. “It was an aspiration of mine when I first opened, but I wasn’t a resident.”

Huffer can help create change — if his introverted nature doesn’t hold him back. As his father, Larry Huffer Sr., said, “If you keep doing what you do, you will keep getting what you get.”

One thing is certain: Huffer isn’t going anywhere. He loves the Temple Mound across the street and the outdoor scenery at Fort Walton Landing. Downtown is his home.

“I feel like in five or 10 years, this will be the locals' 30A,” Huffer said. “Downtown Fort Walton will be the place tourists come to get the local experience.”